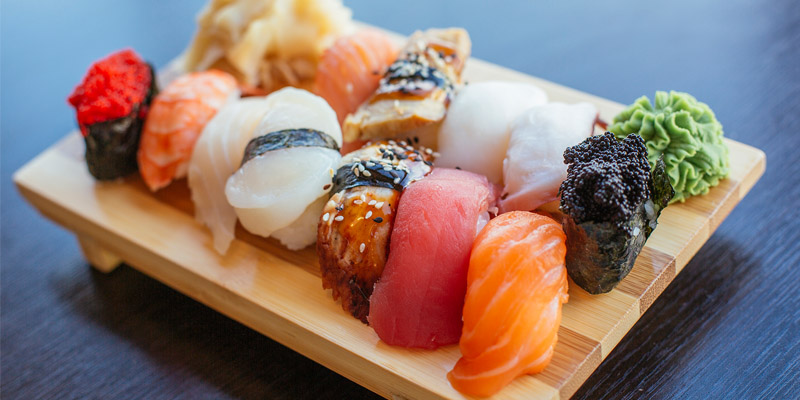 Sushi comes in a variety of different shapes and sizes, and it includes everything from fast inexpensive plates served up at a local market, to elaborate 5 star dining experiences. Sushi is beloved all across the world, making it a truly global cuisine.

Below are some fun sushi trivia facts to broaden your knowledge about sushi.

1. It takes upward of 10 years of training (and as many as 20!) to become a sushi chef, known as an “itamae” (“in front of the counter”). You’ll start at the bottom of the ladder on cleaning duty before you even learn how to make the sushi rice, let alone get anywhere near a cutting board.

2. Women weren’t traditionally allowed to be sushi chefs, as it was believed that their warmer hands and perfume would taint the taste and quality of the fish.

3. Although high-end nowadays, sushi was originally a fast food enjoyed by merchants for lunch during the Edo period.

4. Sushi vinegared rice is known as “su-meshi”, while the pressed rice ball that it’s molded into for nigiri is called the “shari”, and the topping is the “neta”.

5. Originally, sushi rice was thrown out, not eaten with the fish. Rice was used as part of the preservation method to weigh down fish and promote fermentation ver the course of several months, then thrown away. Over time, sushi was eaten after a shorter and shorter fermentation time, and the rice started to become eaten with the fish when it was fermented for only a couple of days.

6. A traditional sushi knife is only meant to be sharpened on one side. The other side of the blade is flat, which creates a finer edge for cutting the fish.

7. Sushi should be eaten light to dark. This is because darker colored pieces of fish are stronger in flavor and will leave an aftertaste on your palate. However, if you’ve opted for an omakase (chef’s choice) course, you should eat each piece in the order presented to you, rather than trying to save any one particular piece.

8. Wasabi is added to sushi to soften any fishy odors and draw out the flavor of fish, and also acts as a natural antibacterial, suppressing microbes and bacteria that can cause food poisoning.

9. The most expensive sushi on record is a five-piece set of nigiri sushi wrapped in 24-karat gold leaf and garnished with real diamonds. It was made by Angelito Araneta, Jr. of the Philippines for nearly $2,000.

10. Sushi is traditionally eaten with fingers, not chopsticks. These days, you’ll see this more commonly at high-end sushi restaurants rather than at conveyer belt sushi places.