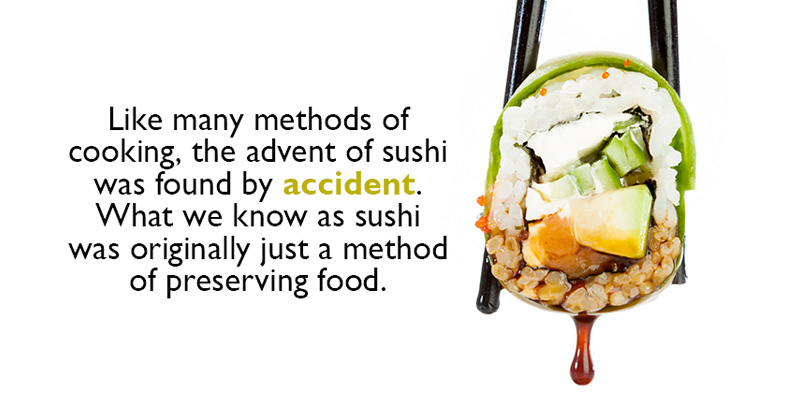 Wonderfully addictive, cultural, and artistic — sushi remains a mystery to the uninitiated. Why would anyone want to pay so much for a few tidbits of raw fish? Unlike the supermarket sushi slopped out by chains in the West, a true sushi experience is unforgettable and difficult to recreate. Masters in Japan know how to make each bite a ride of color, texture, taste, and presentation. But out of all the wonder-lust for sushi, there are unknown secrets that many do not know about. Let’s explore!

The Rise of Sushi

Although the Japanese get full credit for what we call sushi today, the inspiration for sushi is thought to have started in Southeast Asia. Nare-zushi, fermented fish wrapped in sour rice, originated somewhere around the Mekong River before spreading into China and later Japan.

The modern-day concept of sushi was invented in Japan by Hanaya Yohei sometime around the end of the Edo period sometime in the mid-1800s.

Once upon a time, sushi didn’t require a platinum credit card to enjoy. Sushi caught on originally as a cheap, quick snack to eat with the hands while enjoying a theater performance. Forget the popcorn: pass the sushi!

Wasabi or Not Wasabi?

Real wasabi comes from the root of the wasabi japonica plant in Japan, not horseradish as is often substituted.

The powerful burn of wasabi comes from naturally antimicrobial chemicals in the plant, the perfect compliment for killing potential microbes and parasites in raw seafood.

Authentic wasabi is pricey; sometimes sushi restaurants even charge for it. The stuff often provided in mid-range sushi restaurants is made from horseradish and mustard powder then colored green with artificial dyes to resemble the real deal.

Sour, fermenting rice was wrapped around aged fish only to aid in the process of creating umami — a unique, sour taste. Once the fermentation process was complete, the rice was discarded and only the fish consumed. The fermenting rice also helped to preserve fish and to protect it from flies.

Not So Savory Nori

Nori — the seaweed used to wrap sushi — was once scraped off of wooden pier legs and even the undersides of boats. The scummy substance was then pressed into sheets and dried in the sun. Today, nori is cultivated and farmed. Western brands toast nori for safety reasons, while many Japanese brands don’t bother and opt to protect the fishy taste.

If you live in Steamboat Springs, Colorado or close to it, make sure to visit 720 Fusion Fresh to enjoy an unforgettable sushi experience. Or, simply order online from our website, here.