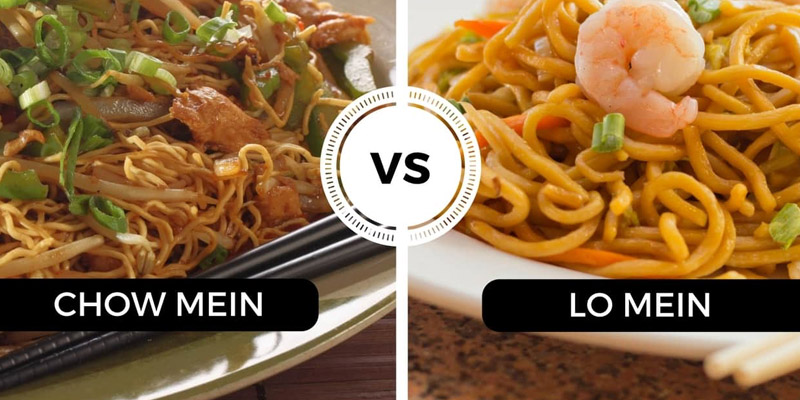 Both chow mein and lo mein dishes start with egg noodles, made from wheat flour mixed with egg. Chow mein noodles can be either flat or rounded. For preparation, cooks start with either fresh or dried noodles, which are then parboiled. The parboiled noodles are then added to the stir-fry mixture and cooked until crispy. This preparation results in a variety of textures within the dish.

Cooks generally start only with fresh noodles for lo mein dishes. These are also parboiled. They can then be added to a stir-fry dish with a lot of sauce, tossing them only long enough for them to soak up the sauce. Otherwise, cooks simply pour the stir-fry over the cooked noodles and stir. Lo mein noodles are known to soak up the sauce.

Because the noodles start out exactly the same, the noodles themselves have the exact same nutrition: 237 calories, 125 calories from fat, 13.8 grams of fat, 25.9 grams of carbohydrates and 198 milligrams of sodium.

There are many kinds of chow mein dishes. They typically include a meat such as beef, chicken or shrimp stir-fried with vegetables. The stir-fry often includes crunchy vegetables such as celery and carrots. Onions, cabbage, and mung bean sprouts are other typical ingredients. The sauce is usually soy-based. Sometimes cooks fry the noodles into a patty and serve the stir-fry over this.

Lo mein dishes also come in several varieties. They, too, include a stir-fry of meat such as beef, chicken, or shrimp with vegetables. Bok choy and cabbage are common vegetables for lo mein. The sauce can be soy-based or based on oyster sauce. Lo mein dishes typically include more sauce than chow mein dishes do.

Both chow mein and lo mein come from northern China, where wheat-based dishes are more common than rice-based ones. They are both widely available in American Chinese cuisine as well.

For the most authentic Asian cuisine in Steamboat Springs, Colorado, stop by and dine with 720 Fusion Fresh. We have a friendly staff that aims to satisfy.