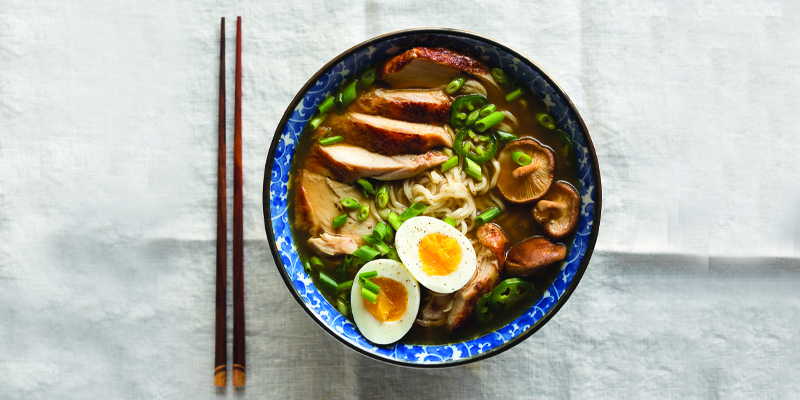 If you haven’t yet delved into this hot culinary trend, you might be wondering how the cheap packets of dried noodles you ate in college suddenly made the leap to high-end restaurants. But the truth is, those microwavable noodles bear no resemblance to the ones being served in authentic noodle shops across the world. In fact, today’s ramen noodles have much more in common with the ones being served 100 years ago.

So just what is ramen, anyway? And how did it suddenly become so popular? Below, we break down ramen’s tasty evolution.

Ramen is a Japanese adaptation of Chinese wheat noodles.One theory says that ramen was first introduced to Japan during the 1660s by the Chinese neo-Confucian scholar Zhu Shunsui who served as an advisor to Tokugawa Mitsukuni after he became a refugee in Japan to escape Manchu rule and Mitsukuni became the first Japanese person to eat ramen, although most historians reject this theory as a myth created by the Japanese to embellish the origins of ramen. The more plausible theory is that ramen was introduced by Chinese immigrants in the late 19th or early 20th century at Yokohama Chinatown. According to the record of the Yokohama Ramen Museum, ramen originated in China and made its way over to Japan in 1859. Early versions were wheat noodles in broth topped with Chinese-style roast pork.

WHAT ARE RAMEN NOODLES MADE OF?

Like so many other types of noodles, ramen is made from wheat flour, water, and salt. That mixture is kneaded together into a dough, then rolled (or hand-pulled), cut, and steamed. But there’s a crucial ingredient that makes ramen different from any other type of noodle: kansui, a type of alkaline water that gives ramen noodles their signature springy texture. While it’s possible to mimic the effects of kansui by substituting it with baking soda, true ramen artisans will make the extra effort to track down a bottle of the real stuff.

Ramen soup is generally made from stock based on chicken or pork, combined with a variety of ingredients such as kombu (kelp), katsuobushi (skipjack tuna flakes), niboshi (dried baby sardines), beef bones, pork bones, shiitake, and onions. Some modern Ramen broths can also be vegetable based. Tare is often added to broth to make the soup.

After basic preparation, ramen can be seasoned and flavored with any number of toppings,[27] including but not limited to:

Most tonkotsu ramen restaurants offer a system known as kae-dama (替え玉), where customers who have finished their noodles can request a “refill” (for a few hundred yen more) to be put into their remaining soup.[28]

Are You Feeling Hungry?

If so, stop by 720 Fusion Fresh in Steamboat Colorado to taste these traditional noodles and more Asian cuisine. You can also order online by clicking here.