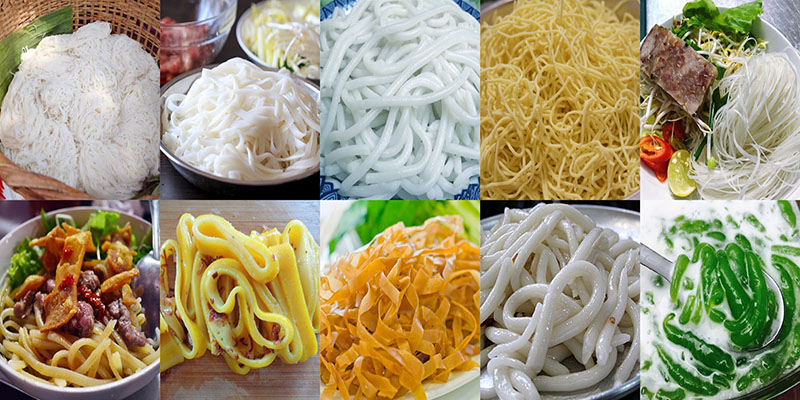 Whether you slurp them, gulp them down, or twirl them on your fork, everyone seems to love noodles.

There is some dispute over who originally came up with the idea of mixing water and flour to create noodles. The Arabs claim to have been the first to use dried pasta, as a means of preserving flour during their forays across the desert. But regardless of their origin, we do know that the Chinese have been feasting on noodles for approximately 2000 years since the Han dynasty (206 BC – 220 AD). In fact, some experts believe that the Italians got their first taste of pasta when Marco Polo returned home from his long trek across China with a host of exotic food items, including noodles.

Chinese noodles, known collectively as mien, fall into three main categories. The most common are wheat flour noodles, which can be made with or without eggs. While today wheat flour noodles are enjoyed throughout China, they originated in the north, where wheat is a staple crop. Depending on the remaining ingredients, wheat noodles can be white or yellow, thin as spaghetti or thick as fettucine, stiff or extremely elastic.

Made from rice flour, water, and salt, rice noodles can also be thick or very thin, the latter almost resembling long strings of coconut. The same is true of rice sticks. There are also rice paper wrappers which come in either circular or triangular shape. Finally, cellophane noodles are clear noodles made from ground mung bean paste.

In China, making “hand-pulled” noodles is an art involving holding the stretched out paste in both hands and whirling it around several times. Then the paste is laid out on a board and folded and refolded repeatedly. Eventually, the paste is transformed into long, thin, noodles. While in China it is still possible to watch vendors make hand-pulled noodles, today most noodles are made by machine.​

How to Enjoy Noodles

Noodles are eaten hot or cold, steamed, stir-fried, deep-fried, boiled, or served in a soup. For the nutritionally-inclined, noodles are an excellent source of protein. Besides being low in calories, they are extremely high in complex carbohydrates.

Come visit 720 Fusion Fresh and discover all the flavors of Asian Fusion Cuisine in Steamboat Springs, Colorado. We look forward to seeing you soon!