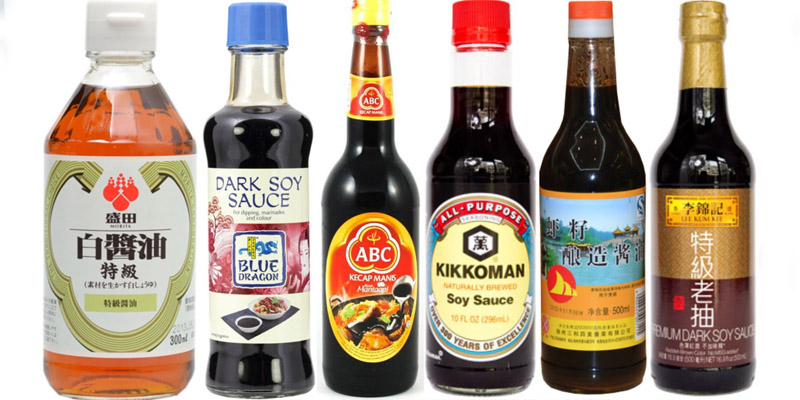 What do wine and soy sauce have in common? The more they age the more flavorful and complex the taste. Soy sauce is a 2,500-year-old condiment, and over the years there has been a lot of variation. Let’s explore!

Among brewed soy sauces, there’s another split: the geographic style. While soy sauce styles vary among cuisines including Korean, Indonesian, Thai, Filipino, and more, the types you’re most likely to find at US grocery stores are either Japanese or Chinese in origin and/or style.

There’s a third distinction: light or dark. The difference is largely due to the length of aging. Both Japanese and Chinese light soy sauces are thinner and lighter in color (relatively speaking) but more intense in flavor than their dark counterparts. Dark Chinese soy sauce, which is aged the longest, also tends to be sweeter due to the addition of molasses or another sweetener.\

And here’s another wrinkle: Dark Japanese soy sauce is what’s most available and used, even if the bottle isn’t labeled as such, which it usually isn’t.

In Chinese cooking, it’s the opposite: light soy sauce is more common. Bottles will indicate light—sometimes labeled “thin” or “superior”—or dark. The latter is reserved for stews or as a flavor booster or finisher in sauces,

Tamari is a Japanese soy sauce brewed with soybeans and no wheat—but sometimes there is a trace amount. So, not all tamari is gluten-free. Check the label to make sure.

And not every bottle labeled “gluten-free” is considered tamari. For instance, Kikkoman’s gluten-free soy sauce is made with soybeans and rice instead of wheat.

The key words to look for on the bottle are “brewed” or “traditionally brewed.” That and a scan of the ingredients list will tell you what you’re getting. The fewer ingredients, the better, Young and Roberts said.

Beyond that, it’s up to your palate, as brands vary widely in sodium levels and nuances of flavor.

Soy sauce will last a long time unopened. The best-by date on the bottle should be a good year to two years out. But oxygen is its enemy, so you’re better off choosing a smaller bottle.

And once opened, keep it in a cool, dry place. It’s not necessary to refrigerate soy sauce, but doing so will extend its flavor and freshness.