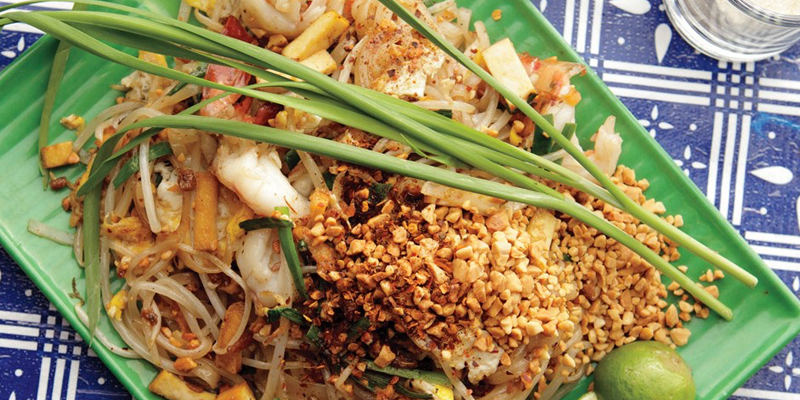 Pad Thai, the noodle dish made with chewy, stir-fried rice noodles, vegetables, bean sprouts, peanuts, and egg, among other things, is so popular it’s become one of the most popular noodles in Asian cuisine. But not too long ago, it could hardly be found in Thailand. That is, until Plaek Pibulsonggram, or Phibun, as the late Thai prime minister is also known, introduced it to his people.

The late 1930s were a particularly difficult time economically for the country, and rice noodles, which were both cheap and filling, provided a much-needed antidote. Couple that with vegetables, bean sprouts, and inexpensive protein, and it was the perfect, nutritious meal. “[Phibun’s] series of decrees from 1939–1942 suggested what could be done to strengthen the Thai economy, to instill national image and pride—and to improve the national diet. Popularizing a noodle dish was one means to that end,” Esterik wrote. Phibun’s government not only disseminated the recipe for pad Thai, but encouraged street vendors to make and sell it throughout the country.

“It may be the original fast food in Thailand,” Nitya Pibulsonggram, Thailand’s former ambassador to the United States and former minister of foreign affairs, told Gastronomica in 2009.

What’s most fascinating about pad Thai, however, is that it probably isn’t even Thai. Noodles, stir-fry, and, especially, noodle stir-fries are quintessentially Chinese. In fact, just about every ingredient found in pad Thai isn’t native to the people after whom the dish is named. “The only really Thai ingredient is the pounded dried chillies,” the Bangkok Post admitted. Even the dish’s full name, kway teow pad Thai nods to its Chinese origins (kway teow is Chinese for rice noodles). “Its name literally means ‘Thai-style stir-fried noodles,’ and for a dish to be so named in its own country clearly suggests an origin that isn’t Thai”. Indeed, the Thai seem to agree—in Thailand, it’s explicitly referred to as a Chinese noodle dish.

For the most authentic Pad Thai in Steamboat Springs, Colorado, stop by and dine with 720 Fusion Fresh. We have a friendly staff that aims to satisfy.