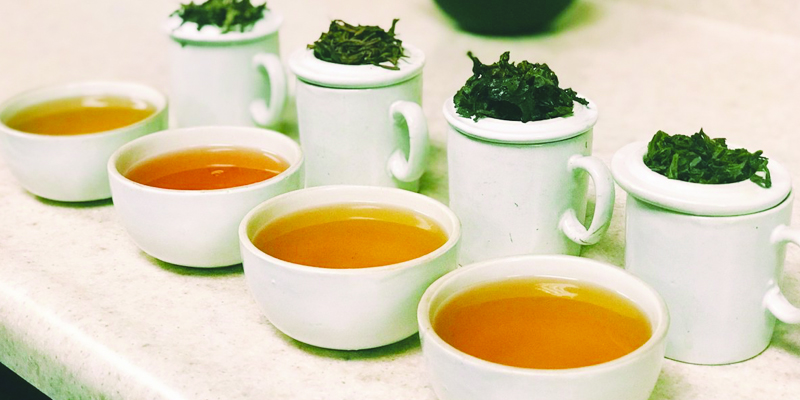 Tea is one of Asia’s most popular drinks. In this 720 asian food blog, we are going to explore the different varieties of popular teas throughout Asia.

Oolong is semi-fermented. It is grown specially in the southern regions of China like Taiwan, Guangdong and Fujian.

Very often, the tea is consumed together with Cantonese style dim sum or Hokkien/TeoChew style Bak kut teh (a dish of pork stewed with spices like pepper, cloves, nutmeg etc.).

Black Tea is another type of tea that is grown in China, and South Asia. The tea is called black tea because of its dark color. It is a popular tea in the west.

In Chinese, however, it is called red tea when translated literally. To the Chinese, the color resembles red more than black.

Black tea is fermented and there are about twenty main types of black tea in China.

Scented tea is processed tea by infusing tea leaves with the scents of flower petals within a closed compound.

Thus, the classification of scented tea is according to the categories of tea and flowers that it originated from.

Scented tea is excellent for people who are not used to the strong taste of tea and is excellent accompaniment for meals.

White tea is slightly fermented. Its taste tends to be described as light with a sweet aftertaste. However, different people have different interpretation of its taste.

White tea is only grown in China and no where else. It is produced in the province of Fujian. Fujian is the main tea growing region in China as its climate is suitable for cultivating such tea. The history of tea cultivation in Fujian is long and one of the founders of this website is a direct descendent of Fujian tea growing civilization. The other well-known tea produced in this region is Oolong tea.

Compressed tea is found mainly in the south. It is the oldest form of tea made in China. It is still used by some tribes in the southern part of China as a form of medication or Shamen magic.

It is made by high pressure compression into shapes resembling bricks. Thus, they can also be known as brick tea. In fact, this is the direct translation of its original Chinese terminology.

Green tea in Asia is almost as popular as coffee is in the West. Japanese, Chinese and Taiwanese green teas are filled with polyphenols which phytochemicals that are almost as 100 times as powerful as the antioxidant found in Vitamin C. Tea’s polyphenols is primarily known as catechins that prevents the uncontrollable growth of new blood vessels. This, many believe,help to stop cancer by preventing newly-emerging tumors from growing by robbing them of their sustenance for growth. Catechins can also stop DNA deformations caused by carcinogens or cancer-causing substance from coming up in the first place.

Feeling thirsty? Come by 720 Fusion Fresh today and enjoy a cup of tea and one of our mouth-watering asian dishes! We look forward to seeing you soon in Steamboat Springs, Colorado!