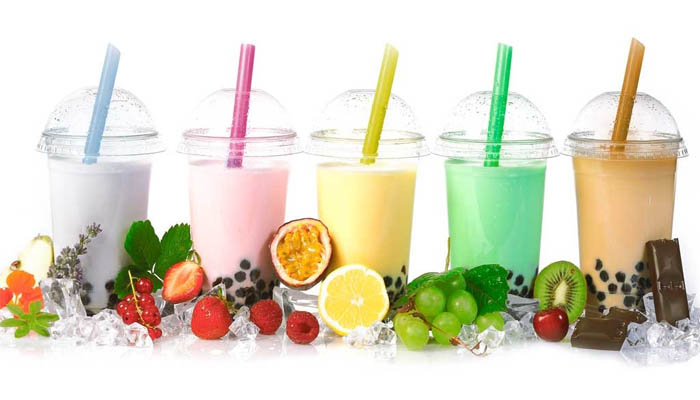 Bubble Tea is one of the most popular drinks we serve at 720 Fusion Fresh in Steamboat Springs Colorado, but not too many people know how Bubble Tea originated. In this post, we will explore the origins and the different varieties of Bubble Tea.

At a small Taiwan tea stand in the early 1980’s is where Bubble Tea first took root. It first gain popularity from elementary school children who would  look forward to buying a cup of refreshing tea after school. It was an every day occurrence for tea stands to set up in front of the schools and compete for business with the best selling teas. One concession owner became creative  with her tea when she started adding different fruit flavorings. Because of the sweet and cool taste, children loved the taste. It did nit take long  before other vendors heard about the new and popular tea, so they started to add flavoring to their teas also. When mixing the tea and fruit, the mixture needed to be shaken well for a good taste. The shaking of the mixture caused  bubbles in the drink, which came to be known as “Bubble Tea.”

The Birth of Tapioca Pearls

Bubble drinks are usually cool, refreshing, and a sweet drink with tapioca pearls sitting on the bottom of a clear cup. Sometimes the drink is made with fresh fruits, milk, and crushed ice to create a healthy milk shake. You can also find drinks that are made of powdered flavoring, creamer, water, and crushed ice. And if you like it like the Asians do, the cool drink usually includes a healthy tea, infused by a flavoring. honeydew bubble tea.

Tapioca pearls are black, but can sometimes be found to be white or transparent. Depending on the ingredients of the pearl, the color varies. The white and translucent pearls are made of caramel, starch and chamomile root extract. The black pearl includes sweet potato, cassava root and brown sugar, which add the black color.

The consistency of tapioca pearls are somewhere between jell-o and chewing gum. They are the size of a marble. They are also known as the “boba” drink in Western China because it is described as to having the same texture as the female breasts.

Whether you have experienced the refreshing taste of Bubble Tea on the streets of Asia or you are trying it for the first time, stop by 720 Fusion Fresh in Steamboat Colorado for a wide selection of authentic Bubble Tea flavors. We look forward to see you soon!