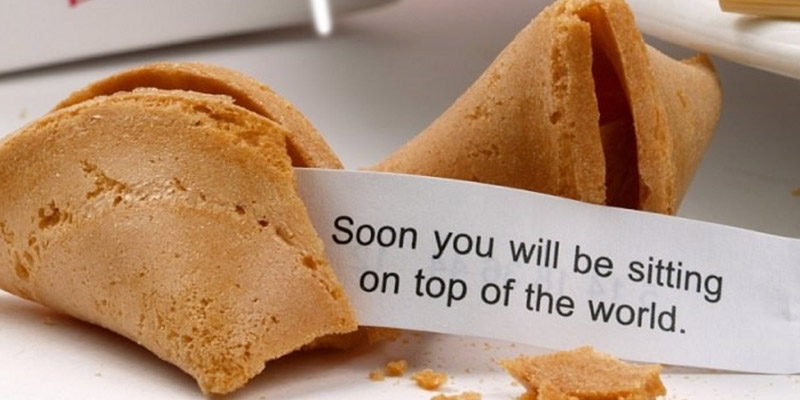 Fortune cookies, an American invention, originated in California. However, the mystery of who the actual inventor was and the city where it originated is still a debate that lives on in debate. Even more interesting, the fortune cookie, in fact, may not even be Chinese American.

Chinese or Japanese, Angelino or San Franciscan?
One history of the fortune cookie claims that David Jung, a Chinese immigrant living in Los Angeles and founder of the Hong Kong Noodle Company, invented the cookie in 1918. Concerned about the poor he saw wandering near his shop, he created the cookie and passed them out free on the streets. Each cookie contained a strip of paper with an inspirational Bible scripture on it, written for Jung by a Presbyterian minister.

Another history claims that the fortune cookie was invented in San Francisco by a Japanese immigrant named Makoto Hagiwara. Hagiwara was a gardener who designed the famous Japanese Tea Garden in Golden Gate Park. An anti-Japanese mayor fired him from his job around the turn of the century, but later a new mayor reinstated him. Grateful to those who had stood by him during his period of hardship, Hagiwara created a cookie in 1914 that included a thank you note inside. He passed them out at the Japanese Tea Garden and began serving them there regularly. In 1915, they were displayed at the Panama-Pacific Exhibition, San Francisco’s world fair.

In 1983, San Francisco’s pseudo-legal Court of Historical Review held a mock trial to determine the origins of the fortune cookie. (In the past, the Court had ruled on such pressing topics as the veracity of Mark Twain’s quote, “The coldest winter I ever spent was a summer in San Francisco” and the origins of the Martini. *) To no one’s surprise, the judge (a real-life federal judge from San Francisco) ruled in favor of San Francisco. Included among the evidence was a fortune cookie whose message read: “S.F. Judge who rules for L.A. Not Very Smart Cookie.” Equally unsurprising, Los Angeles has denounced the ruling.

From Confucius to Smiley Faces

Fortune cookies became common in Chinese restaurants after World War II. Desserts were not traditionally part of Chinese cuisine, and the cookies thus offered Americans something familiar with an exotic flair.

Although there have been a few cases reported of individuals actually liking the texture and flavor of fortune cookies, most consider the fortune to be the essence of the cookie. Early fortunes featured Biblical sayings, or aphorisms from Confucius, Aesop, or Ben Franklin. Later, fortunes included recommended lottery numbers, smiley faces, jokes, and sage, if hackneyed, advice. Politicians have used them in campaigns, and fortunes have been customized for weddings and birthday parties. Today messages are variously cryptic, nonsensical, feel-good, hectoring, bland, or mystifying.

From Chopsticks to High Tech

Fortune cookies were originally made by hand using chopsticks. In 1964, Edward Louie of San Francisco’s Lotus Fortune Cookie Company, automated the process by creating a machine that folds the dough and slips in the fortune. Today, the world’s largest fortune cookie manufacturer, Wonton Food Inc. of Long Island City, Queens ships out 60 million cookies a month.