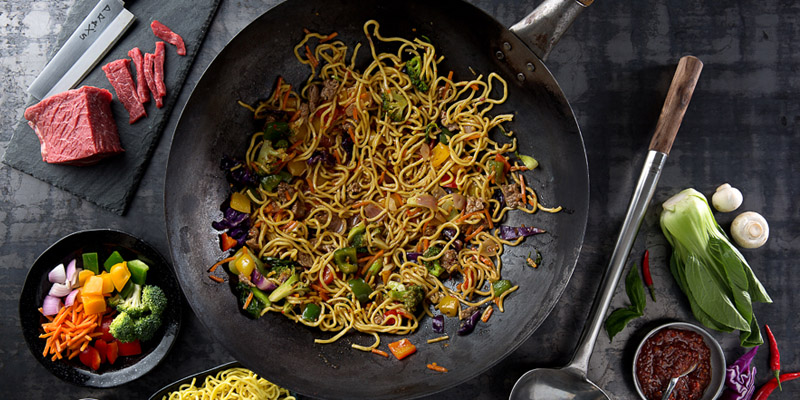 Perhaps the most versatile cooking tool in Asian cuisine is the wok. A wok is a round-bottomed cooking vessel, and one of the most common cooking utensils used in China and South East Asia. Woks are used in different Chinese cooking techniques, which include stir-frying, steaming, pan frying, deep frying, and poaching boiling braising, searing, stewing, making soup, smoking and roasting nuts. Wok cooking is done with a long handle called chahn (spatula) or hoak (ladle). The long handles of these utensils allow cooks to work with the food without burning their hands.

A wok is considered to be one of the most common cooking utensils and is even used in East Asia and Southeast Asia. Since being invented around 2,000 years ago (although some will disagree, saying no more than 500 to 1,000 years ago), this versatile piece of cookware has become a very popular niche cooking tool throughout a large part of the industrialized world.

The wok is made out of two primary materials: either carbon steel or cast iron. Traditionally, cast iron has always been favored, but in recent years, both materials have become increasingly popular. You may also find woks which are created with non-stick coatings, such as PFA or Teflon, and also aluminum. Now that we know what a wok is, and its most basic facts, let’s delve further into its history.

The very first known woks were thought to be recreated from little pottery models on the pottery stove modes in the Han Dynasty tombs. The Han Dynasty lasted from roughly 200 BC until 200 AD. Historians and metallurgists are still unsure, however, if this versatile cooking pot was an original Chinese invention, or if the idea was borrowed from some other culture. Many agree that it was most certainly the second- that is, that it was borrowed from elsewhere. The reason behind this is that the same sort of pan is used throughout India, and Southeast Asia (such as Thailand, Laos, Khmer, or the Malay Peninsula), and so many scholars assume it was borrowed from one of those places, where it is almost universally called a Kuali. This route of thinking continues, thinking that the word ‘kuo’ must have developed from the word ‘kuali.’

Stop by and enjoy your favorite Asian cuisines at 720 Fusion Fresh, or order online here.