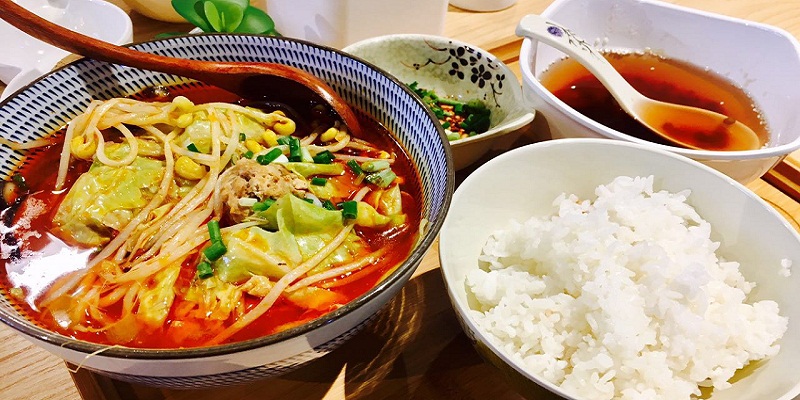 There are a lot of symbolic dishes served during Chinese New Year. Each individual dish is steeped in tradition and is a homonym for a particular wish for the upcoming year, such as “have a lot of fun” or “make a lot of money.” In the spirit of the festivities, we’ve put together 10 essential Chinese, or Lunar, New Year dishes, and included the significance behind them all.

The tradition of eating rice cake goes back 3,000 years. The Chinese word for rice cake, or nian gao, correlates to the phrase “nian nian gao sheng,” which means “increasing prosperity year after year.” Eating rice cakes also celebrates the beginning of the rice harvest in the spring.

The saying that goes with the Chinese New Year fish dish is “nian nian you yu,” which means “may the year bring prosperity.” The character for prosperity, yu, is a homophone for the word for fish, yu. Families buy a whole fish, which symbolizes unity, and typically steam it with ginger and a light soy sauce. It’s also important to leave leftovers for the next day, because this signifies that the prosperity will overflow.

These sweet rice balls typically are consumed during the 15th day of the celebration, known as the Yuanxiao Festival. The 15th day is also the first night of the full moon of the new lunar year. The dish is made differently depending on the geographic location. In the southern part of China, they’re called tang yuan, and the stuffing is put in last, after the dough is made. In northern China, the rice dumplings are called yuanxiao. The filling is made first and rolled onto flour in a bamboo basket. The roundness of the rice balls signifies a complete circle of harmony and unity within the family. They are served in a soup and traditional fillings include sesame paste, red bean or peanuts.

Turnip cakes, which originated in the Guangdong province, are a must-have for Cantonese people celebrating the New Year. It’s also embraced in Taiwan because the Taiwanese pronunciation for turnip cake, cai tao gui, is a homonym for fortune. It is associated with the phrase “hao cai tao,” which means good luck. The cakes can be served in two ways: steamed or fried.

Families traditionally spend New Year’s Eve preparing the dumplings and will eat them at midnight. It’s a custom that dates back to the Ming and Qing Dynasties. The dumpling is shaped like an old-fashioned gold ingot. The saying associated with dumpings, or jiao zhi, is “gen shui jiao zhi,” or “ring out the old year and ring in the new.” Legend has it that the more dumplings you eat during the New Year celebration, the more money you can make in the upcoming cycle.

Long noodles represent longevity. They usually are served uncut. In Taiwan especially, miswa, thin salted wheat noodles, are widely used and can be served in stewed broth. Miswa signifies long life, and the noodle is also a traditional birthday dish.

Mustard greens are a standard vegetable dish for the celebration. They are commonly known as jie cai, but in the context of the new year, they are labeled as “chang nian cai,” which translates to “perennial vegetables.” They can’t be overcooked, so they’re an ideal symbol for a long life. You’re expected to eat the entire vegetable — the homonym for this is chang chang jiu jiu, or longevity.

Mandarin oranges are a common fruit during the New Year. The word in Chinese for oranges, ju in the Teochew dialect, is a homophone for ji, the word for auspicious or lucky. Pomelos are another favorite. The Chinese word for pomelo, you zhi, sounds like the word for “to have” in Chinese, which is you. Citrus fruits are in abundance in grocery stores during this time of the year.

The poultry should be served whole with the head and the feet still attached. This connotes unity and a good marriage between families. A common cooking method: Marinate the chicken and then air-dry it for about three hours until the skin is like paper. Flash-fry it and then coat it with spices.

Come celebrate the Chinese New Year with 720 Fusion Fresh and discover all the flavors of Asian Fusion Cuisine in Steamboat Springs, Colorado. We look forward to seeing you soon!